Dumbya clings to the delusion that Iraq ". . . did not let us in." This is serious, and a real disconnect from reality! The first time he claimed it (see below) I pointed it out to my friends and they unanimously shrugged it off as just more stupidity from the chief idiot of the United States. But now that he's repeated it (and I even saw another Republican Senator claiming the same thing!), it's worth asking a simple question.

If a Democrat asserted something as counter-factual as this, what would the press do?

It seems simple to me. Either Dumbya is the most mendacious "chief executive officer" (his own words) we've ever had, or he is delusional. In either case, he's not fit to be President, is he?

For the most recent lie, catch the clip at whitehouse.gov, about 8:55 in, it's on or about here , then find the meeting with the President of Poland on January 27th. Watch the video--you won't believe your eyes. Read the transcript, it's better than Kafka. When, exactly, did it happen that they "did not let us in."?????????

This is the second time, that I know of, that Dumbya has asserted that they "did not let us in." The first time was with Kofi Annan and it's even more surreal (if that's possible) because he pokes Kofi as he states that the weapons inspectors were not let in. You can read the transcript, or watch the video, or both. (in the video he gestures and pokes Kofi as he says "we gave him a chance to let the inspectors in", right around 11:50 into the clip and the look of confusion on Kofi's face is sad to behold)

Just in case you don't have time to follow any links, here's the lie in the words of the 88 himself:

REPORTER'S QUESTION: So even though there has been some question about the intelligence -- the intelligence community knowing beforehand that perhaps it wasn't, you still believe that when you gave it --

The larger point is, and the fundamental question is, did Saddam Hussein have a weapons program? And the answer is, absolutely. And we gave him a chance to allow the inspectors in, and he wouldn't let them in. And, therefore, after a reasonable request, we decided to remove him from power, along with other nations, so as to make sure he was not a threat to the United States and our friends and allies in the region. I firmly believe the decisions we made will make America more secure and the world more peaceful.

Who, for the love of G*D, voted for this jobbernowl? My parents definitely did, to "restore dignity" to the whitehouse, but they're fascists. Among the boomers, who voted for the smirking chimp? I know it was close, and if Dumbya's brother hadn't diddled the voter registration in Florida then he wouldn't be in, but still! Here's a longish article about the situation in the United States. This is a good one. Reminds me of why I subscribed to Zmag back in the day.
Excerpt:
In sum, there was a three-pronged security failure of great seriousness: a failure to take obvious leads and do something about them; a possible conflict of interest that may explain this foot-dragging; and a day-before-9/11 budget decision that shows a degree of incompetence and misplaced priorities that is staggering .

BuckStopsThere.com is an interesting little project of Democrats.com that attempts to illustrate how everyone in Dumbya's administration shrugs off responsibility the way a duck sheds water!

Molly Ivins hasn't lost her touch, as this June column illustrates. Isn't it about time the new "trickey dicky" gets asked a few questions about his past business dealings? As Molly says, how do we justify spending the absurd amount of time on Whitewater and then ignoring the many lapses of Cheney? Of course, the answer is that Whitewater was never about anything other than disrupting Clinton's Presidency. The REPUBLIC party happily hamstrung our government out of spite.

Wondering about the title of this web page? I like to call the smirking chimp "the unelected resident" because I've found the arguments that the Supreme Court used to install Dumbya to be intellectually bankrupt. The Supremes used their extraordinary power to short-circuit the election and install the man they wanted to win. I've read several analyses of the decision and I've yet to be persuaded that it was anything other than craven politics by the Supremes. Even those who try to support the decision end up saying things like "for the good of the system, they had to do it." So to "save the system", they killed it? In the final analysis, I think Dershowitz gets it completely right--the decision fails the "if the shoe were on the other foot test". If Gore won the initial decision and Dumbya was requesting his (legal) recount, would the Supremes still have quashed the recount? Do you think so? Of course not.
QED.
Stick a fork in them, they're done.

Here are a few links that heap scorn on the resident:

Here's a hilarious comic that's been circulating. The original URL is in the picture: 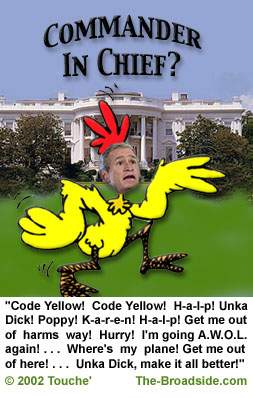 I enjoyed reading "The Bush Dyslexicon" by Mark Crispin Miller and I recommend that you read it too. The paperback edition is supposed to be updated with post-9/11 analysis and I'll get around to buying that edition real soon now. One take-home message from the book is that "The 88" (as a certain legislator dubbed the dumbya) isn't as stupid as he appears on TV.

But sometimes you wonder. Take, for instance, his press conference on 7/8/2002 wherin he assured the American people that there was no "malfeance" in his selling of Harken Energy shares and his failure to report. What the FUCK? What is "malfeance"? I guess he's speaking the literal truth-- there's no malfeance. There's no "grubexerenceiality" either! Why does the idiot who was appointed president get to use "special words"? Why doesn't ANYBODY CARE TO POINT IT OUT? The dumbya screwed up his face for a special effort (he was about to use a three syllable word) and came up with "malfeance". No wonder Ari rarely lets the dumbya act in an environment without a script. Malfeance. Twice. No comments from the press.

You can read the transcript here: Straight from the 88's website! Note that "the 88" didn't even have his speech altered or footnoted. I guess "malfeance" is now a word. I use it in daily conversation, myself, and I delight in explaining to braindead dittoheads exactly where I learned to speak in dumbya's idiolect.